As a new member to the Board, I was invited to the Grand Opening ceremonies for the US Lacrosse headquarters this past weekend, which included the dedication of the IWLCA Building. Friday night consisted of a donor reception, Saturday was a tour of the facilities (museum, field, locker rooms, training room, state of the art rehab center and offices) and Sunday was a full day of lacrosse. 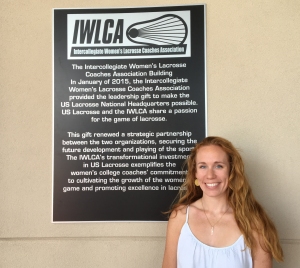 I didn’t know what to expect since I was one of the many coaches who were floored when the Board announced the leadership gift to US Lacrosse last year. At the time, I didn’t understand why our organization, which just recently reached a level of financial security, would make such a large donation to a somewhat outside group. I didn’t see the vision then and I was struggling to support this decision when I arrived at the USL headquarters on Friday afternoon. However, that quickly changed once the “thank you” speeches started and other donors and USL staff began approaching the IWLCA Board members in attendance to offer their appreciation. Saturday, I was able to give two full facility tours as well as greet many of the visitors to the museum. My first tour was to a woman who was inducted in the 1996 USL Hall of Fame class, and the second was to a father and his 10 year-old son. Their experiences and backgrounds in lacrosse were vastly different, but what was the same was their appreciation for the IWLCA’s support of the new headquarters and how it connects the sport’s past to its future. Outside of these two tours, I also received so many sincere “thank you’s” for our organization’s donation, I was touched. Sunday capped off a wonderful weekend of high-level lacrosse with the US Women’s and Men’s National Teams’ intra-squad games and then the NYC Firefighters vs. Police game to celebrate the 15th anniversary of the September 11th terrorist attacks.

Not only are former players and coaches appreciative of the new headquarters building, but so is the US Lacrosse staff. This is the first time ever their entire staff has been housed in one location. I did not realize that up until this building was finished, they have been spread across several offices. More often than I should admit, I forget how much US Lacrosse does for our sport, particularly at the grass roots level, and I understand now how much more they will be able to do for the growth and support of our game in their new home working as one fully united staff.

Going to this dedication was a fantastic experience and I’m glad I participated in so many of the events. I wish I had the vision when this decision was announced to see then what I did this weekend. I believe this was the right decision for the IWLCA and the sport, and I am glad the Board of Directors had the courage and vision to support such a fantastic and much-needed initiative to help grow the game we all love.